Too much smoking in French films

According to an article on the BBC website published on, French cinema shows smoking in nearly all the country's films, a new study by the French League Against Cancer reveals

The French League Against Cancer argues that this smoking exposure "glamorises smoking" and is calling for new measures to cut down the amount shown in movies.


Stepbac® supports this call.  As we ouline in our book “"Stepbac® from Smoking," movies play a major role in persuading teens that smoking is cool and reinforces the myth, that smoking helps calm nerves or help solve problems in difficult situations..

All these myths have been busted by science years ago and you can read all about that in our book.

Smoking is totally not cool and lighting up does not help to solve any problems. If you have a problem then smoking is just another problems, not a solution to existing problems.

At Stepbac we support a ban smoking in any TV or movies, even in many historical productions. Yes, many people smoked in the past. It's a historical fact.

Some might say, but Churchill smoked cigars and so cigar smoking should be a part of a movie about him.

Well, Churchill went to the toilet every day too but that's not shown in any movie about Churchill we have ever seen.

Whether Churchill smoked or not, was not relevant to decisions he made that changed the course of the war or the history of the world, in our opinion.

Smoking did not make Churchill more wise or interesting. That he often held a cigar means nothing. He often wore a hat or a waistcoat. Did that change his character?

Sorry, but smoking has had its day and now deserves to be removed from all media. Smoking is a "con" from start to finish. A mere trick but one that is costing lives every daycine.

Read more in our top selling book "Stepbac® from Smoking" which discuss the role of media and smoking
.
Quit Smoking using a New, Simple method with step-by-step Explanations and Illustrations (Stepbac® Series). 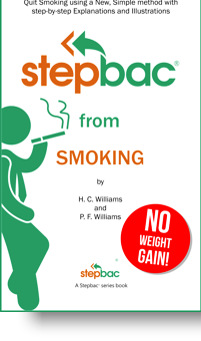